It’s tight at the top. The two giants of the capital meet again tonight, a month after their last encounter here. Dead and buried that night, Dinamo have since revived with four wins and a draw and, if they win tonight, will be back in genuine title contention with only two more games to go. FCSB have drawn their last two matches, but a victory for them would open up a gaping three-point lead over Viitorul at the top.

We make sure we get to the ground nice and early (7.45) this time, after the frustration of pizzagate last month. And boy, is it worth it. The sound of chants from inside spreads through the evening air just as it should, whetting the appetite on the approach. My son, making his first visit to this fine stadium, is boggled not only by the scale of the structure but by the quantity of humans around us – the only football he’s been to is at Rapid in the lower divisions, with no more than a few thousand people in the stands. One minute in the security queue – they’re not even taking coins off us today – and we’re in.

The 37,000 people here make it comfortably the biggest attendance of the season. The Dinamo fans, as the home crowd on this occasion, are less concentrated and vigorous but there is something brewing in the Peluza Cătălin Hîldan: what looks like the top of a banner is visible behind the goal and white cords are strung from the roof down to the lower stand.

One minute after kick-off, proceedings are halted because of a radical transformation in the peluza, accompanied by a very loud and highly dramatic soundtrack. 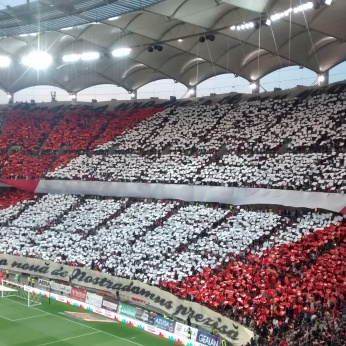 Who’s the b*****d in the black? Apparently it’s Nostradamus and he’s come up with a couple of new predictions: by 2020 Dinamo will have a stadium without a running track, and Steaua will no longer exist. The second outcome is expressed not as a wish but an indictment of letting people who don’t “get” football be in control of it. It’s a reference, presumably, to FCSB’s owner and the Romanian Army, whose struggle for power over the club has been a deeply unedifying spectacle for the past couple of seasons. The first, meanwhile, reminds me that this banner flies above the main entrance to Dinamo Stadium:

An enormous quantity of white paper now covers the penalty area, and by the time the stewards have cleared the pitch we have had a ten-minute stoppage. When play is eventually resumed, FCSB’s players show no sign of being intimidated by the volume and ferocity of the dinamoviştii and look to assert their superiority. This is normally their home ground, after all. Throughout the first half, star striker Alibec is fouled repeatedly and blatantly, and the free kicks flow almost as freely as the coins launched by ultras at both ends towards enemy players. Playmaker Boldrin’s curling strike from one of these dead-balls forces Dinamo’s veteran Panamanian goalie Penedo into a terrific save to tip the ball over the bar.

As usual, play is littered with niggly fouls and good tackles disguised as niggly fouls; the referee cannot tell the difference. Sure enough, a rare home attack ends with Nemec, under very slight pressure from a defender, sprawling full length towards a low cross … and the verdict is a penalty, which Hanca confidently puts away. Against the run of play, the Red Dogs are ahead. The rest of the half is a flurry of yellow cards, as the referee decides he’d better try to look like he’s in control. Then, on the counter-attack just before the break, a resilient Alibec run through the middle creates a wonderful chance for Boldrin. The Brazilian cannot hit the target, even though it looked a gimme, and Dinamo’s dressing room is the happier when the whistle blows.

FCSB start the second half as they did the first. There are flashes of the skill and fluid movement at pace which ought to have them run away with the league, and Boldrin, in particular, has to brave a painful barrage of small change from the peluza. In the 54th minute a cross is half-cleared by Dinamo; a harmless, aimless header back across the box from FCSB full-back Pleașcă is nowhere near finding a team-mate, but no matter, because the entire defence, including the goalkeeper, who between them have it easily covered, with no attacker in sight, are suddenly paralysed by the inevitability of a humiliatingly soft equaliser against their deadly rivals and duly let the ball bounce sheepishly in. It is Pleașcă’s first goal for the club. Is everyone else trying too hard?

With half an hour remaining, Rivaldinho is substituted for Bušuladžić and – I’ve never seen this in a Romanian match – there was no visible or audible reaction whatsoever to the change. Admittedly it is difficult to tell whether the young Brazilian has been strictly instructed by his coaches that football’s a team game and he is not to show off his gifts no matter how great the temptation, or whether he’s just not that good. A ripple of appreciative applause for the lad going off is the norm, I thought – or a cheer if you feel the lad’s played badly and the other lad can only improve things.

The next change, for FCSB a few minutes later, does provoke a reaction from the crowd: off goes the injured Pintilii and on trots Gabriel Tamaș to a chorus of jeers. I don’t know why, so I’ve read up about him. The former Brașov, Tractorul, Galatasaray, Spartak Moscow, Celta Vigo, Auxerre, West Brom, Doncaster, Watford and Cardiff defender, who also had three spells at Dinamo, is 33. His career has been dogged by the demon drink but he still managed to accumulate 65 caps for the national team from 2003 to 2015. See this article on Wales Online or his Wikipedia entry for brief details of some of the contracts that have been cancelled by mutual consent. I’m still not sure why so many jeers though – if anyone can enlighten me, please do.

Alibec, who has been limping for most of the game after his rough treatment early on, comes off too and is replaced by FCSB’s other big winter signing, the Bison, Harlem-Eddy Gnohéré. The game is perfectly poised for a controversial late winner. Gnohéré runs around a lot, trying to frighten the horses with his hulking frame and, I imagine, a mean look in his eye, but these horses are not easily spooked: they were his team-mates until a few months ago and they can handle the Bison. Time ticks away, and a draw is not much good for either team. Then, finally, it comes, The Event: four minutes into injury time, a tired Nemec plays the ball into the box, ahead of the advancing Romera. De Amorim takes both ball and opponent with equal vigour, and it could not be other than a penalty kick. The stands erupt euphorically, and Hanca’s success from the spot is never in doubt – to me and him, at least.

This iteration of the eternal derby has gone on for longer than most. A ten-minute delay caused by paper on the pitch. Six minutes of added time in each half. There is time after Hanca’s winning goal for one last FCSB free-kick, but it’s well wide, and at the final whistle the fans go nuts.

FCSB are still level on points with Viitorul, and Dinamo are now just two behind them. The title is in Viitorul’s hands because of their head-to-head advantage over The-Team-Formerly-And-In-Some-Quarters-Still-Known-As-Steaua. So Hagi’s prodigies are two wins away from a most unlikely league champions’ trophy.

With one penalty box collision, the dogs have simultaneously thrown their old enemy’s title tilt into serious doubt, and belatedly relaunched their own bid for glory. But these boys barely scraped into the play-off. They were out of the running a month ago. They haven’t finished in the top two for a decade. It couldn’t happen. Could it?

More matchday stories in the “I was there” section here…